The ideal anticancer drug would be one that is effective at killing rapidly producing cells, is targeted directly to the tumour location, and is non-toxic until it reaches the diseased area. Platinum-II (PtII) based chemotherapy drugs have been life changing for many, with the most common drug, Cisplatin, providing treatment and cures for cancerous diseases in the bladder, breast, cervix, lung, ovaries, and head and neck, to name a few. In the active drug form, PtII binds to DNA which interferes with cellular replication, killing the rapidly proliferating cancerous cells. However, PtII is also toxic to healthy cells, causing severe side effects, especially in those with pre-existing kidney issues. Non-active (prodrug) PtIV counterparts show minimal to non-existent toxicity to normal cells, and can be converted to the active PtII drugs through catalysis; understanding these biological mechanisms and taking advantage of directed light-based therapies may provide novel treatment methods for curing cancer. To do this, researchers must first identify the catalytic processes and intermediary states during the Pt reduction process; the Edinburgh Instruments LP980 Transient Absorption Spectrometer and the FLS1000 Luminescence Spectrometer are perfectly matched to measure and improve  novel therapeutics (Figure 1). A team of scientists from Spain and Italy, led by Prof. Luca Salassa of the Donostia International Physics Center (San Sebastián, Spain), in collaboration with Dr. Virginia Martínez-Martínez from University of the Basque Country (Bilbao, Spain), utilised Edinburgh Instruments time-resolved luminescence and transient absorption spectrometers to study the photocatalytic mechanisms of flavins (FLs) converting PtIV prodrug complexes to active PtII drug substrates in a biological environment. Although metal complexes are rarely known as being substrates in catalytic reactions, the researchers were able to demonstrate how flavins are effective redox photocatalysts for these PtIV prodrug substrates, and show that this catalytic process is driven by the photogenerated triplet state of the flavin. 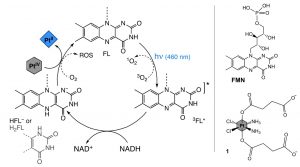 Figure 2. (Left) The photocatalytic mechanism of PtIV-to-PtII reduction mediated by a photoexcited flavin (FL) in the triplet state having extracted two electrons from NADH, and (Right) structures of one of the flavins, flavin mononucleotide (FMN), and one of the PtIV prodrugs (1) used in this study.

Figure 2 illustrates the photocatalytic cycle of flavins reducing PtIV prodrug substrates to active PtII drug substrates.  Photoexcitation into the flavin absorption band generates an excited singlet state that rapidly undergoes intersystem crossing to an excited triplet state, 3FL*. Due to the large oxidising potential of 3FL*, it is able to extract two electrons from biological donors like NADH, to generate the active catalytic species HFL– (or H2FL depending on the solution’s pH). HFL– can then reduce the PtIV prodrug substrates to active PtII drug substrates and repeat the cycle. In the absence of light, this process can still take place, but its efficiency is drastically reduced. To validate the process, the researchers used absorption spectroscopy of flavin mononucleotide (FMN) with NADH in an oxygen free environment after light irradiation; this showed the characteristic absorption change to HFMN-. Further H1 NMR studies of FMN, NADH, and PtIV substrate 1 (Figure 1) after light irradiation indicated the presence of HFMN– and its return to FMN with additions of PtIV substrate 1 to the solution. 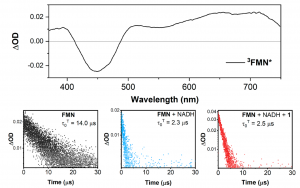 Figure 3. (Top) The time-resolved transient absorption spectrum using an ICCD camera of 3FMN*, and (Bottom) the lifetime traces using a PMT of the triplet state measured at 700 nm for FMN, FMN + NADH, and FMN + NADH + PtIV substrate 1 showing significant quenching of the native 3FMN* lifetime. The excitation wavelength was 445 nm for all measurements.

To further prove the intermediate states of this photocatalytic mechanism, the researchers skilfully employed nanosecond transient absorption to measure the photoexcited FMN spectral and lifetime information by itself, and combined with NADH and PtIV substrate 1 (Figure 3). A broad, high oscillator strength NIR triplet absorption can be directly correlated to the formation of  3FMN*, whose lifetime is pointedly quenched from 14 μs to approximately 2.4 μs upon additions of NADH and PtIV substrate 1. This data evidences that the 3FMN* triplet state is generated in high yield, and is the primary photoproduct required to initiate the catalytic cycle. To ensure that the singlet state has minimal, if any, involvement in the photocatalytic process, photoluminescence measurements of the spectra and associated lifetimes for FMN, NADH, and PtIV substrate 1 were measured. 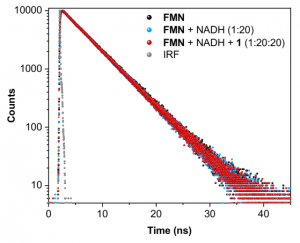 Figure 4 shows the fluorescence decay profiles of FMN, FMN + NADH, and FMN + NADH + PtIV substrate 1; no lifetime changes were observed from the native FMN’s 4.7 ns lifetime upon additions of either two other molecules. This concludes that neither NADH nor PtIV substrate 1 interact with the photoexcited singlet state, 1FMN*, and that the photocatalytic process is initiated only upon formation of the 3FMN* after intersystem crossing from the singlet state.

Making use of photocatalytic processes is one of many tools available for medicinal chemists pioneering novel drug molecular systems, deliveries, and treatments. Edinburgh Instruments LP980 Transient Absorption and FLS1000 Photoluminescence Spectrometers are engineered to provide the best measurements for researchers to study and understand the underlying photocatalytic mechanisms, facilitating this exciting research to the highest levels.