It is well known from astronomical imaging that various atmospheric conditions and weather effects have an impact on image quality. This is due to local changes of the refractive index of the air in the optical path. These changes are wavelength-dependent and vary with changes in the atmospheric pressure and its humidity.

In the field of machine vision, both pressure and humidity can usually be assumed to be constant over the whole optical path. However, there is an exception to this rule if there are turbulent air currents in the optical path that may cause local pressure changes. A typical cause for turbulences is heat convection between parts at different temperatures. Common heat sources in machine vision can be either the illumination, high load electronics, or high temperature samples such as poured metal.

The different refractive indices in the turbulent air act as a gradient lens that warps the image content in the affected areas. The magnitude and extension of the warping is both too complex and too dependent on the setup to model mathematically. Instead we show an example measurement of this effect to represent its typical magnitude and to guide you in measuring it in your own setup.

In a line scan camera the optical distortion is constant for each line along the scanning direction and is therefore not visible in the image. This fact reduces the problem to one spatial dimension -- perpendicular to the scan direction -- and the time dimension. Both dimensions can be observed at once by acquiring an image of a static target with the line scan camera. The optical distortion will shift the position of the image content in x-direction while the extension of the warping in y-direction represents the time information.

This shift can easily be measured by imaging a static line pattern. The basic principle of this measurement is depicted in figure 1 (at top). A reference image intensity profile is taken by averaging a region of interest containing an area of a few columns around each x position (depicted in green). A square test block (depicted in red) is passed along the whole column and for each position the test data is shifted in subpixel steps via interpolation. The shift with the highest correlation between test and reference is recorded for each pixel and can be plotted in a color scale image to visualize the data. 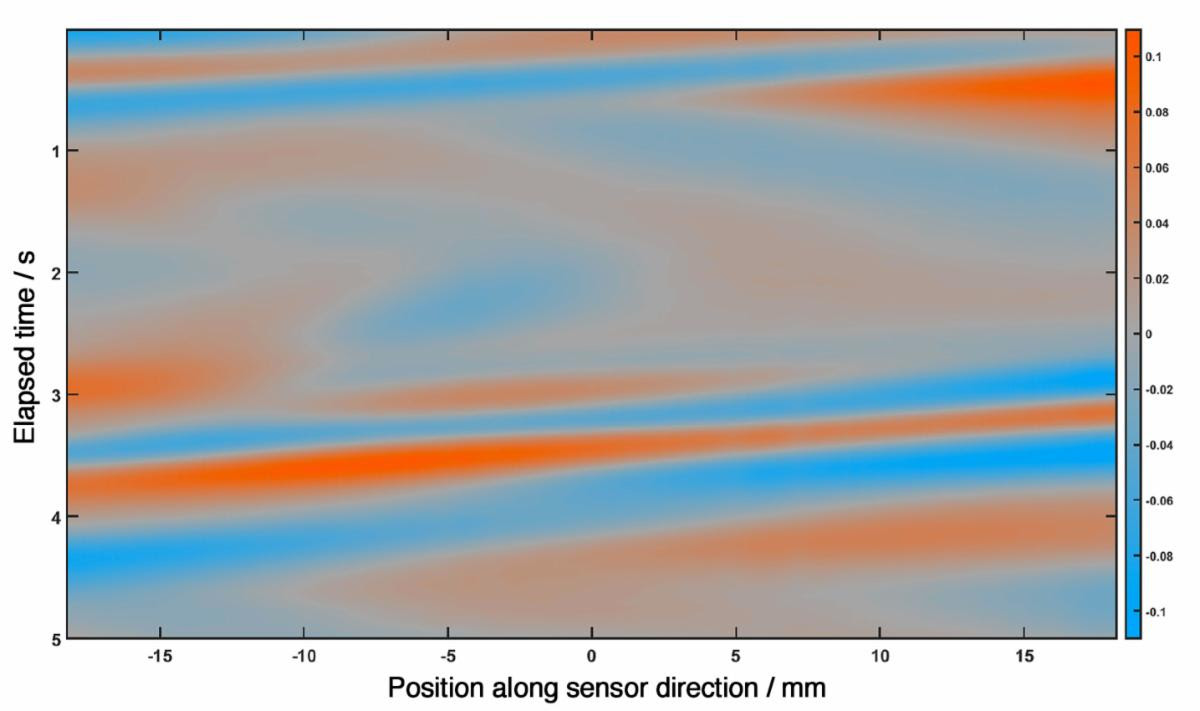 Figure 2 shows this visualization from a static line pattern image captured with a Chromasens allPIXA camera with 5μm optical resolution. The heat source in this case is the Chromasens Corona II tubelight illumination that was operated at maximum LED current. In this setup the magnitude of the optical distortion is in the range of <0.15 pixel. The turbulences are visible in the shift image as areas of similar distortion. They extend over a size of 10mm - 30mm and persist for 200ms - 800ms.

This measurement shows that the magnitude of the image disturbance due to heat convection from a standard illumination will not have a noticeable impact for standard inspection tasks. However specialized image processing tasks that depend on subpixel accuracy (e.g. sub-pixel accurate feature extraction or sub-pixel based image correlation) will likely show decreased measurement accuracy due to these distortions.

The image warping effect can be suppressed by preventing the turbulences. For this purpose a fan can be utilized to create a laminar air-flow. As the pressure in a laminar flow is constant no gradient lens effects will occur. The air flow either needs to cover the whole surface of the heat source or the whole volume of the optical path where turbulences are likely to appear.

Figure 3: Recommended suppression setup for a Chromasens tubelight setup. For illustration, the sensor is depicted as a red point in the left, and as a red line in the right image

The second option is typically easier to realize for line scan cameras as the optical path is constrained to a plane. The fan can therefore be installed to the side of the camera with the flow direction along the sensor line. In the example above the air in the volume directly below the viewing slit of the tubelight needs to be perfused by a laminar flow. As the sidewalls of the illumination block a direct side access for the air stream the fan was installed on top of the tubelight and blowing into the viewing slit at a tilted angle as shown in figure 3. This method reduced the magnitude of the distortion to an indiscernible small size.

A heat source near the optical path can introduce image warping that locally shifts the position of the image content. For line-scan cameras, there exist image regions of similar shift that cover several mm of the field of view which emerge and vanish in the time frame of about one second. Sub-pixel analysis of image content will be influenced negatively by this shift. To suppress this effect it is recommended to cover the whole volume along the optical path that is affected by turbulences with a laminar air current from a fan.